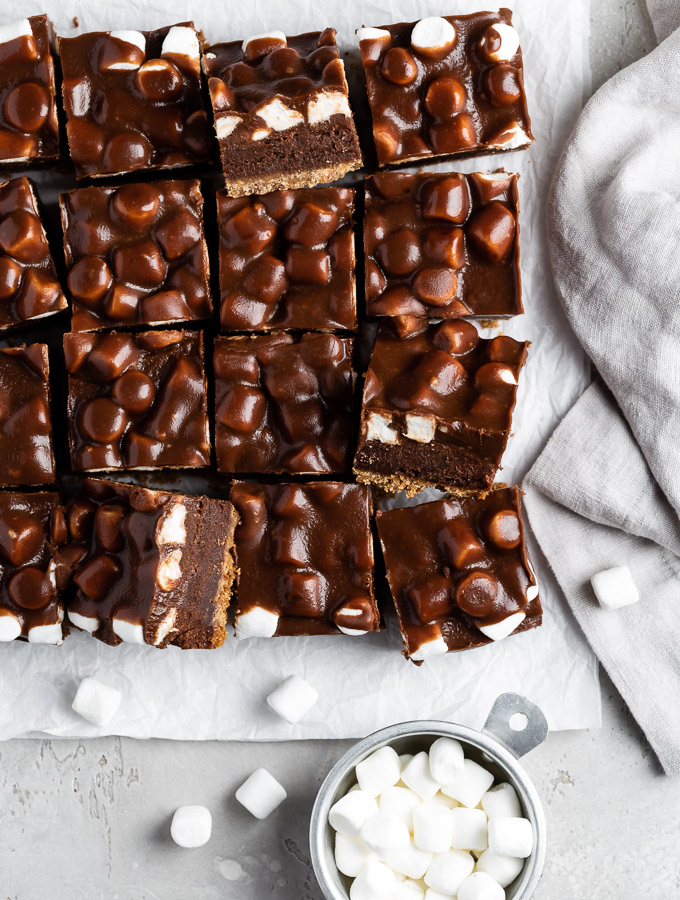 Say hello to chocolate covered s’mores brownies, aka the most ridiculously delicious four layer brownies you’ll ever eat. File this […]

Say hello to chocolate covered s’mores brownies, aka the most ridiculously delicious four layer brownies you’ll ever eat. File this one under “desserts I cannot be alone with in the kitchen”. They are totally and completely irresistible. A buttery, golden brown graham cracker crust is topped with a layer of rich, fudgy brownie and then covered in heaps of mini marshmallows and drizzled with melted dark chocolate. Can you say D-E-C-A-D-E-N-T?? Everyone will love this s’mores brownies recipe and you don’t even need a campfire to enjoy all that delicious s’mores-y flavor we all know and love.

If you’re on the hunt for a decadent, drool-worthy dessert – look no further! These s’mores brownies covered in melted chocolate and mini marshmallows are next level good. The inspiration for this recipe comes from Food52’s marshmallow brownies. Nothing not to love about that brilliant idea. And since I’m never not tinkering with brownie recipes, I took it upon myself to level them up a notch {or five!} by adding a crunchy graham cracker crust and a pinch of espresso to enhance the chocolate flavor. I also made them a smidge sweeter by using bittersweet chocolate rather than unsweetened and scaled the recipe down to fit an 8 x 8 pan.

The result is a perfectly fudgy, super chocolatey brownie concoction that is like no other. The thick, hot-fudge like chocolate frosting that coats the tiny marshmallow mounds puts these brownies in a league of their own. They’re an easy treat to whip up for any occasion like Halloween or Super Bowl Sunday. That’s right. These s’mores-ified brownies aren’t just for summertime my friends. Put these bad boys on repeat all year long!

Not only do I love this brownie recipe because it’s so dang delicious, but I really love a brownie that you can sink your teeth into. With four separate layers these brownies really deliver on taste and texture. Every bite is like a party in your mouth! And the best part is you only need a handful of simple ingredients to whip these up when the craving strikes.

How to make s’mores brownies

These decadent s’mores brownies are made with four separate layers but each one is easy to make with just a handful of simple ingredients. The brownies bake up quickly but leave time for them to cool completely before slicing. Trust me, it’s worth the wait.

Transfer the crumbs in a square 8 x 8 baking pan lined with parchment paper. To create an even layer, use the bottom of a measuring cup to firmly press the crumbs down and into the corners of the pan. Bake at 350°F for about 7-8 minutes or until golden brown and fragrant. Remove the pan from the oven and leave the oven on while you prepare the brownie layer.

Prepare the brownie layer. While the graham cracker crust bakes and cools, make the brownies. You can use the brownie recipe listed here but I also love using my brown butter brownies recipe for an added dimension of flavor. To make the brownies, melt the chocolate and butter over a double boiler until smooth and shiny. Remove from the heat and stir in the espresso powder. Set aside to cool for 10 minutes. Next, beat the eggs and sugar in a stand mixer on medium high speed until thickened. Add the vanilla, followed by the melted chocolate and butter mixture.

Bake the brownies and then top with marshmallows. Bake the brownies at 350°F for 25 – 30 minutes. The edges will look set and the center will still be slightly under baked. My brownies take exactly 25 minutes but no two ovens are the same so keep an eye on yours at the end of the baking cycle. Remove the pan from the oven and immediately top with the mini marshmallows, covering the top of the brownies completely.

Make the chocolate topping. Whisk together the chocolate, butter and marshmallows over a double-boiler on medium heat. Once the marshmallows and butter are completely melted, remove the bowl from the heat and stir in the milk and confectioners sugar. The mixture will be smooth and glossy.

Pour the chocolate on top of the marshmallows. Pour the melted chocolate and sugar mixture over the marshmallows, making sure to cover all areas of the pan. Set aside to cool for one hour and then transfer to the freezer for one to two hours before slicing into squares.

How to slice brownies

Slicing brownies is hardly rocket science but for evenly cut, picture perfect squares you’ll want to follow a few tricks of the trade. First, always line your brownie pan with two pieces of parchment paper. Spray the bottom and sides of your pan with baking spray and then place the parchment sheets perpendicular to each other and allow the edges to hang over the sides of the pan by about two inches. This allows for easy removal of the brownies once they are chilled and ready for slicing. Keep in mind that the longer the brownies cool, the cleaner the slices will be. These chocolate covered s’mores bars are extra thick so I like to chill them in the freezer for about an hour before cutting into squares.

For best results, use a large, sharp chef’s knife. No serrated knives allowed. A ruler comes in handy too but you can always eyeball it if you’re in a hurry to dig in. When ready to cut, press the knife firmly down into the brownies and pull it back out in a swift motion. Avoid using any sawing motions that will leave you with rough, jagged edges. Run the knife under a stream of hot water and wipe it clean between slices. Tah-dah!! There you have it! Perfectly portioned Insta-worthy brownie squares!

If you are a fan of classic s’mores, you’re going to fall head over heals for this s’mores meets brownies mash-up. They are delicious enjoyed at room temperature but I really love them straight from the fridge!

If you love this S’mores Brownie Recipe, you’ll love these delicious s’mores desserts too:

Cool completely before cutting. For best results, freeze for one hour before slicing.

Store tightly covered in the refrigerator for up to 5 days.

facts: the only thing better than an old fashioned

you made it to friday, you deserve a cookie! a fre

cold january days call for a slice of edible sunsh

Time to head back to school and back to the “off

GIVEAWAY CLOSED | on the twelfth day of christmas