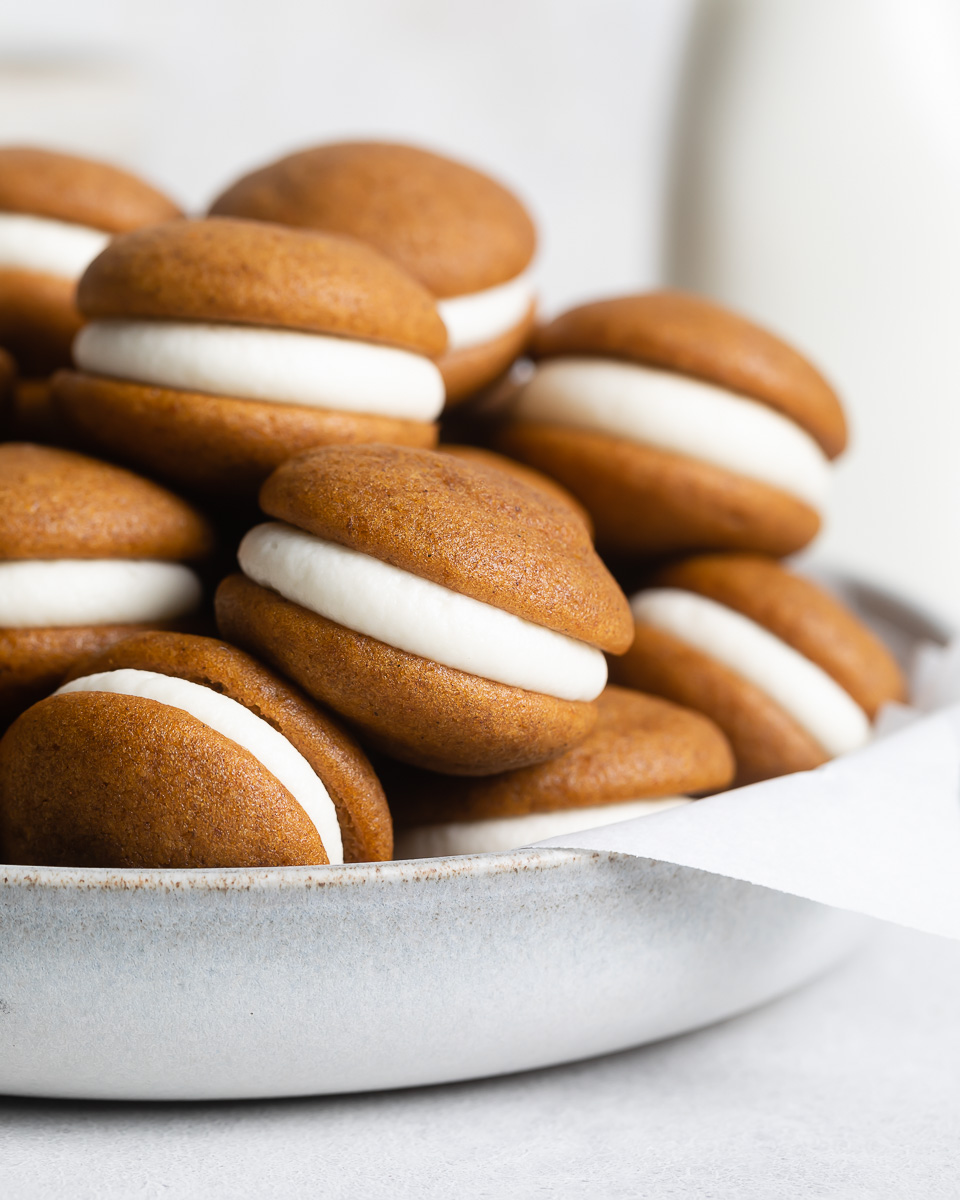 Here’s the thing. I don’t really like pumpkin pie. I know, I know. Who am I??

I don’t dislike pumpkin in general…I’m obsessed with this Pumpkin Bread with Streusel Topping and don’t even get me started on these Chewy Pumpkin Chocolate Chip Cookies. They’re the best ever! It’s really more about the texture than it is about the flavor. Plus, I’m just not a fan of the whole pie making process. But can we talk about pumpkin WHOOPIE pies?? Yes, please!

These light and pillowy-soft pumpkin whoopie pies are the ultimate Fall dessert the whole family will love. Made with the perfect hint of cozy fall spices and a sweet maple cream cheese frosting, they make the cutest bite-size dessert. Chock full of delicious pumpkin flavor, easy to make {and fun to eat!}, these whoopie pies are the best thing to happen to Thanksgiving!

What exactly is a whoopie pie?

Some say that whoopie pies are part cookie, part cake. If we’re being technical, they are actually more like an inside out cupcake with the cake on the outside and a swirl of frosting on the inside. Whoopie pies resemble a sandwich cookie {oh how I love a sandwich cookie!} but have the consistency of cake. So I think it’s safe to say that whoopie pies are the best of both worlds. Whoopie pies, also known as gobs, are a beloved baked good said to have originated in the Northeast. States like Pennsylvania and Maine lay claim to having invented this classic dessert. All I know is that they are downright delicious. If you haven’t had a whoopie pie before, you’re in for a real treat!

These pumpkin whoopie pies come together in no time with a just a handful of baking staples and a sprinkling of warm Fall spices. Here’s what you’ll need:

How to make homemade whoopie pies

Making these fluffy, cake-like cookies is easy. Just follow the step-by-step guide and scroll down for the full recipe and detailed instructions.

Follow these foolproof tips for perfect whoopie pies every time.

How to assemble whoopie pies

These cute as can be mini pumpkin whoopie pies are made extra delicious with a maple cream cheese filling that you’re going to want to smother on everything that comes out of your oven. The frosting is sweet, but not overly sweet and it pairs perfectly with the warm pumpkin spices in the cake.

For best results, firm up the frosting a bit by refrigerating it for 10 to 15 minutes before assembling the whoopie pies. You can pipe a dollop of the maple cream cheese frosting onto the mini cakes, or if you’re feeling fancy, use a star tip to create a pretty swirl. Using a spoon or spatula to scoop the frosting onto the cakes is 100% acceptable too.

If you’re feeling frisky you could sub the maple syrup for one tablespoon of good quality bourbon for a boozy version of these bite size goodies. Now that’s a holiday dessert I can get behind! Once you’ve assembled your mini pumpkin whoopie pies, place them in the fridge to allow the frosting to set. I suggest you enjoy a spoonful of frosting while you wait.

Keep any leftovers tightly covered in the refrigerator for up to three days. The cakes themselves can be sticky so be sure to store them in a single layer or place a sheet of wax paper between stacks. They can be frozen for up to 2 months. Defrost at room temperature before serving.

Don’t forget to bookmark this recipe for the holidays. These mini desserts would make the perfect finale to your Thanksgiving feast!

If you love these Mini Pumpkin Whoopie Pies, be sure to try these other Fall favorites…

Made with the perfect hint of cozy Fall spices and a sweet maple cream cheese frosting, these mini pumpkin whoopie pies make the cutest bite-size dessert. Chock full of delicious pumpkin flavor, they’re easy to make and fun to eat!

Store whoopie pies tightly covered in the refrigerator for up to 3 days.

May be frozen. Defrost at room temperature before serving.

Holiday Gift Guide For The Baker 2022