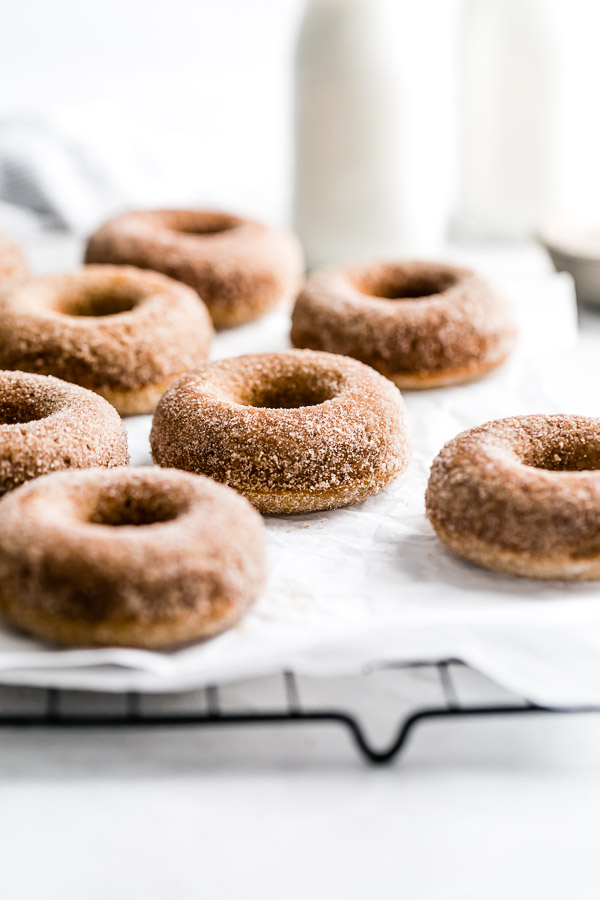 Soft and fluffy homemade apple cider donuts are dipped in a crunchy cinnamon sugar sprinkle for a cozy and delicious Fall breakfast treat. Make a batch in 30 minutes or less!

It’s Fall y’all!!! I for one could not be more ready for a change of seasons. A change of scenery would be awfully nice right about now too, but it seems we’ll have to save that for 2021. I am so excited for some sweater weather, cozy nights by the fire, and all the cinnamon spiced treats like these homemade apple cider donuts. These light and fluffy donuts are full of that cinnamon spice flavor we all crave this time of year. I can’t think of a better way to usher in the Fall season than with a batch of warm sugar coated apple cider donuts fresh from the oven. Dust off your donut pans bakers and let’s get right to it.

WHAT MAKES BAKED DONUTS SO GOOD?

These homemade apple cider donuts are baked, not fried. Best news ever! You’ll get all that delicious, mouthwatering cinnamon spice flavor without all the mess. But wait, there’s more! This easy, peasy recipe comes together with just a few simple ingredients in under 30 minutes! These donuts are slightly crispy on the outside, soft and tender on the inside, and full of warm cinnamon apple flavor with every bite. You’re going to fall in love with these donuts and I can guarantee they’ll be on repeat all season long.

There is no deep fryer required for this recipe but you will need a non-stick donut pan. If you don’t have a donut pan just yet, I can assure you they are worth every penny and you’ll be happy to know you can buy two for not a lot of pennies. I like this non-stick set from Amazon. To pipe the batter into the donut pan you can use a pastry bag fitted with a large piping tip, or simply use a ziplock bag and cut a corner off to fill the donut pan. That’s about it for special equipment – now you just need a handful of basic ingredients and your favorite apple cider. Check your pantry for the ingredients listed below and get baking!

HOW TO MAKE THE BEST APPLE CIDER DONUTS

Use reduced apple cider. This recipe calls for reduced apple cider which just means you need to simmer 1 cup of apple cider on the stovetop until it reduces down to 1/2 cup. This extra step takes just a few minutes and you can even reduce the cider the night before to save on time. Do not substitute regular cider or apple juice in this recipe. By reducing the apple cider we are concentrating the flavor which gives these donuts that delicious, cozy, fresh from the orchard apple taste.

Do not over mix the batter. Donuts can bake up flat and dense if the batter is over mixed. To make the recipe we simply mix together the dry ingredients with the wet ingredients with a rubber spatula until incorporated. The batter will be slightly thick. Mix only until there are no patches of flour remaining and then pipe the batter into the donut pan right away.

Do not over bake. These baked apple cider donuts bake up in no time at all so keep a close eye on your oven. Bake on the center rack for about 8 minutes and then check the donuts every minute or so. Do not bake longer than 10 minutes or your donuts will be dry and tough. To check for doneness, gently press on the top of a donut and if the donut springs back, it’s ready. Remove the donut pan from the oven and invert the pan onto a cooling rack. The donuts should pop right out of the non-stick pan. Allow to cool before coating with melted butter and cinnamon sugar.

Double up on the cinnamon sugar sprinkle. These homemade apple cider donuts are delicious all on their own but they’re even better when dunked in a bowl of cinnamon sugar for the most perfect Fall treat. You can coat each donut with a quick dip in the cinnamon sugar mixture or be like me and give it a double dip for extra goodness. Keep reading for more tips on how to dunk your donuts.

The cinnamon sugar sprinkle is arguably the best part of these baked apple cider donuts. I never get tired of sinking my teeth into the signature cinnamon sugar crunchy topping. Plus it’s made with just two ingredients…cinnamon and sugar (duh!). It’s that easy!

Once the donuts are cool to the touch, whisk the sugar and cinnamon together in a bowl. Quickly dip both sides of each donut in melted butter and then dunk them in the cinnamon sugar mixture. Eat and repeat!

HOW TO STORE BAKED DONUTS

Donuts are one of those baked goods that are best enjoyed the day you make them. If a dozen donuts is too many for your household, halve the recipe and bake up a batch of six. These homemade apple cider donuts are so incredibly delicious I can almost guarantee you won’t have a single crumb left over. If you do, wrap any leftover donuts tightly in plastic wrap and store in a cool, dry place. Do not refrigerate as this will quickly dry out the donuts. These goodies are my favorite way to start the day but they happen to be equally delicious for dessert with a warm cup of tea or a tall glass of cold milk. They’re SO GOOD!

**This post was originally sponsored by Truvia® Natural Sweetener™.  As always, all thoughts and opinions are 100% my own. Thank you for supporting the brands that help make Browned Butter Blondie possible.

If you love these Homemade Apple Cider Donuts, check out these delicious Fall breakfast recipes:

Soft and fluffy homemade baked apple cider donuts are dipped in a crunchy cinnamon sugar sprinkle for a cozy and delicious Fall breakfast treat. Make a batch in 30 minutes or less!

NOTE: This recipe calls for ½ cup reduced apple cider. This takes about 20 minutes plus cooling time. Allow ample time before baking the donuts to prepare the cider.

To make cider, place 1 ½ cups of unfiltered apple cider in a small saucepan. Bring to a simmer, stirring occasionally. Allow the cider to simmer for about 15 minutes until it is reduced to ½ cup. Set aside to cool to room temperature.

When cider is cool to the touch, preheat oven to 350 degrees. Spray two donut pans with non-stick baking spray. Set aside.

Add the wet ingredients into the dry ingredients and use a spatula to stir gently. Before all of the flour is incorporated, add the cooled, reduced apple cider and fold to combine. Do not over mix.

Transfer the batter into a piping bag or large ziplock, snip the corner and pipe the batter evenly into the 12 prepared donut cavitities. Fill ¾ of the way full.

Bake in the center rack of the oven for 9-10 minutes or until the tops are golden brown and the donut springs back when gently touched.

Remove the donuts from the oven and flip the pans over onto a cooling rack. The donuts should slide right out. Cool the donuts slightly before brushing with butter and dipping in the cinnamon sugar sprinkle

To make the cinnamon sugar sprinkle, add 1 cup sugar to a medium, shallow bowl. Add the cinnamon and stir to combine.

Brush or dip both sides of a donut in melted butter and then place them in the bowl to coat evenly with the cinnamon sugar mixture. Repeat with remaining donuts. Serve warm.

foolproof plans for a very good friday night. if c