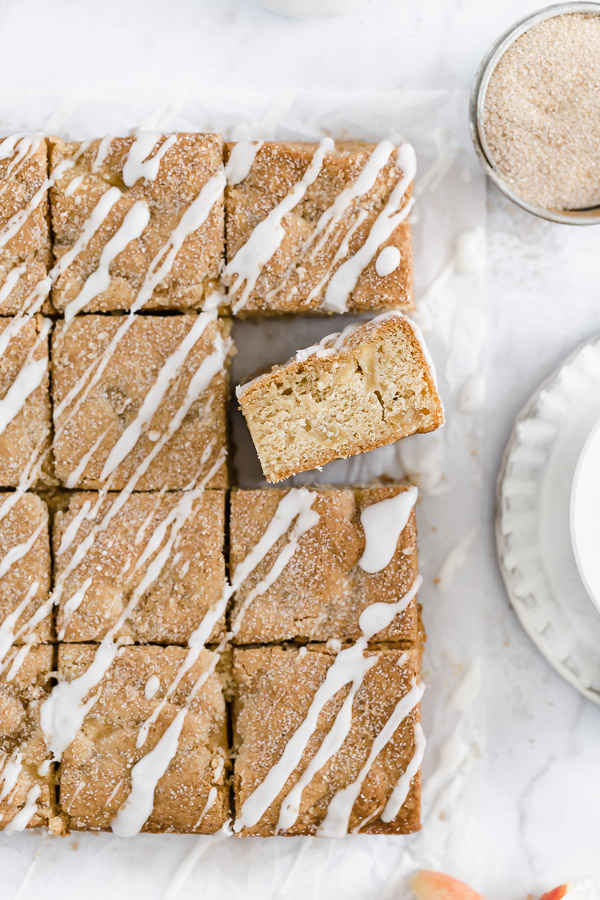 This post is sponsored by Crunch Pak. As always, all thoughts and opinions are my own. Thank you for supporting […]

This post is sponsored by Crunch Pak. As always, all thoughts and opinions are my own. Thank you for supporting the brands that make Browned Butter Blondie possible.

These caramel apple blondies are so moist and chock full of delicious apple flavor. Thanks to Crunch Pak’s Organic Sliced Apples, I can whip up these blondies in mere minutes. Their pre-sliced apples are not only great for snacking on, but they make baking a breeze. Crunch Pak apples always taste great and you get that signature crunch with every bite. And because they are organic, I can trust that I’m getting pure, wholesome fruit every time.

HOW TO MAKE CARAMEL APPLE BLONDIES

My favorite part about these blondies, aside from the fact that they taste like apple pie, is how ridiculously easy they are to make. No scooping or chilling the dough required. Music to my ears! To make these blondies, first we start by browning the butter until the milk solids are caramelized to perfection and it has a heavenly nutty aroma. Don’t even think about skipping this step. This is where the magic happens and it’s well worth the extra time. Browned butter makes everything SO good. And I mean everything! It really is a magical ingredient and it makes these blondies next level. Once you have successfully browned your butter, set it aside to cool while you chop up a few cups of Crunch Pak’s Organic Sliced Apples.

To make the caramel apples we simply combine the chopped apples with brown sugar, heavy cream, a dash of maple syrup, cinnamon and a touch more butter. More butter is better, right?? Once the apples are all bathed in brown sugar cinnamon deliciousness we mix all the ingredients together with flour and baking powder and pour the batter into a 9 x 13 inch baking dish. It’s that easy. Bake at 350 degrees until golden brown and there you have it…caramel apple blondies are served!

HOW TO MAKE THE BEST BLONDIES

Blondies are a one pan wonder that bake quickly and are always a crowd pleaser. Here’s a few tips to make sure they are baked to perfection every time.

I am officially obsessed with these browned butter caramel apple blondies. Shhh…don’t tell all the other blondies. I’ve made these three times already and after one bite you’ll be hooked too. Thanks to Crunch Pak, you won’t have any trouble getting your hands on crispy and delicious apples any time of year. These blondies taste even better the next day and I’m thinking you need to make a tray full of these for your Thanksgiving buffet. They are the perfect post-turkey treat!

Thick and chewy browned butter caramel apple blondies are a must make for fall. Dusted with cinnamon sugar and drizzled with a vanilla glaze, these blondies are next level!

Bread flour gives the blondies extra chew and structure. If you do not have bread flour, use all-purpose flour instead.
Cool blondies completely before cutting with a sharp knife.
Blondies should be stored tightly covered for up to four days.
May be frozen.