I’m that girl that goes out to dinner and immediately looks at the dessert menu first. (Please tell me I’m not the only one.) I like to know what I’m in for and whether or not there is a little something-something splurge-worthy on the after dinner menu or if I’m better off double dipping in the bread basket. My sweet tooth automatically makes a b-line for all the chocolatey things {shocking, I know}. I leave the tart and fruity mango sorbets and key lime pies to my better half since that’s more his cup of tea. More often than not we end up with his and hers desserts and everyone wins. 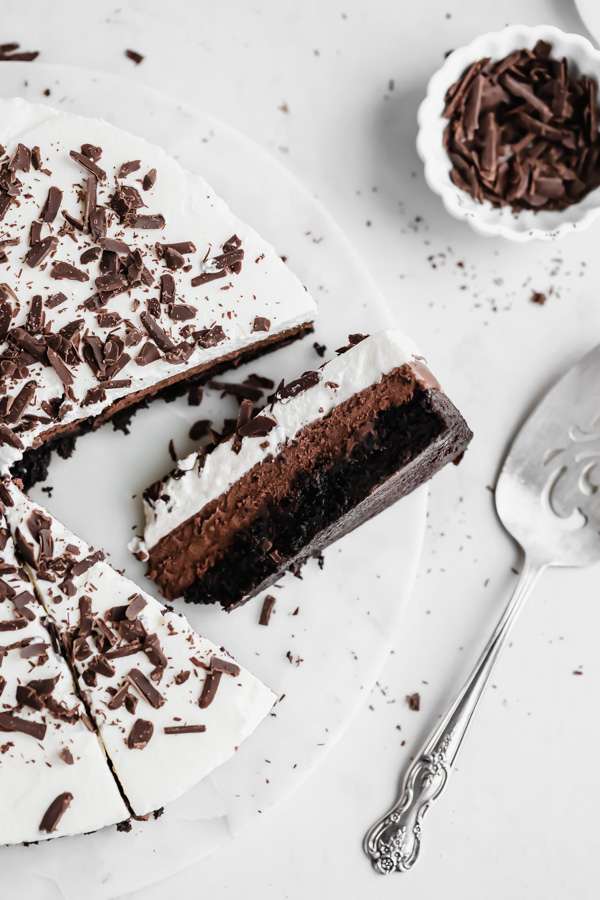 A couple of weeks ago we were in NYC and I ordered a rich and decadent chocolate mousse that was seriously something to write home about. It was insanely rich and silky smooth. Served with just a dollop of freshly whipped cream it could not have been more simple but so incredibly delicious at the same time. I knew it had to be good when my husband repeatedly tried to steal a spoonful and the waiter asked if we’d like one more to share. For the record, we declined. {regretfully} My sweet tooth and I haven’t been able to forget that dreamy chocolate mousse and I literally cannot wait to get back to New York just for dessert. 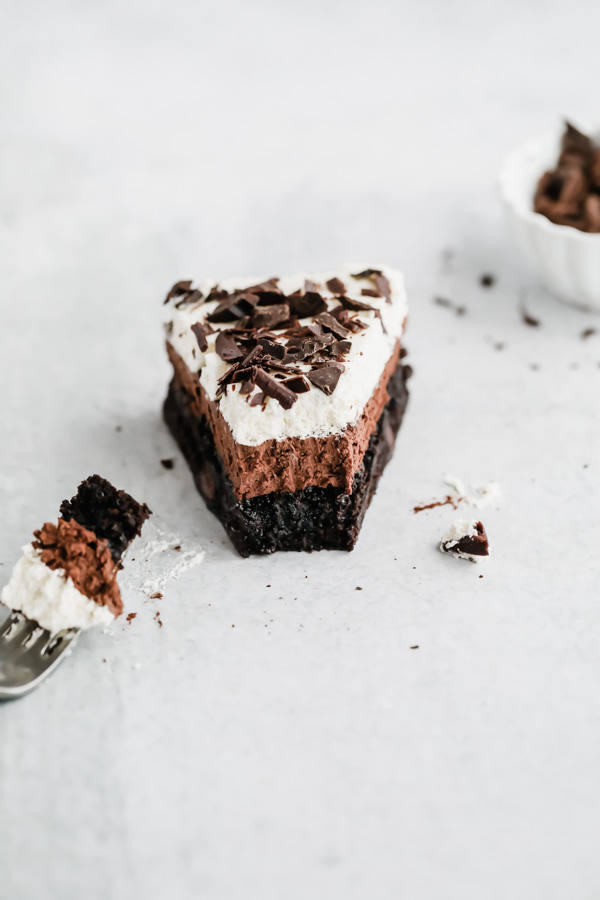 Last weekend I decided to make my own over-the-top chocolate mousse dessert in hopes that it would be half as delicious as the mousse from the authentic little underground Italian place we stumbled upon. So I made a super rich and ultra decadent chocolate mousse from scratch and then it occurred to me it would be even more perfect sandwiched between layers of dark chocolate brownie and fluffy, freshly whipped cream. You know, because I’m extra like that. Not so extra though that the entire dessert had to be made from scratch. I’m all for cutting corners when the time is right and there is no shame in boxed brownie mix people. Not to mention that all that mousse making made for a lot of dishes already and I was over it. 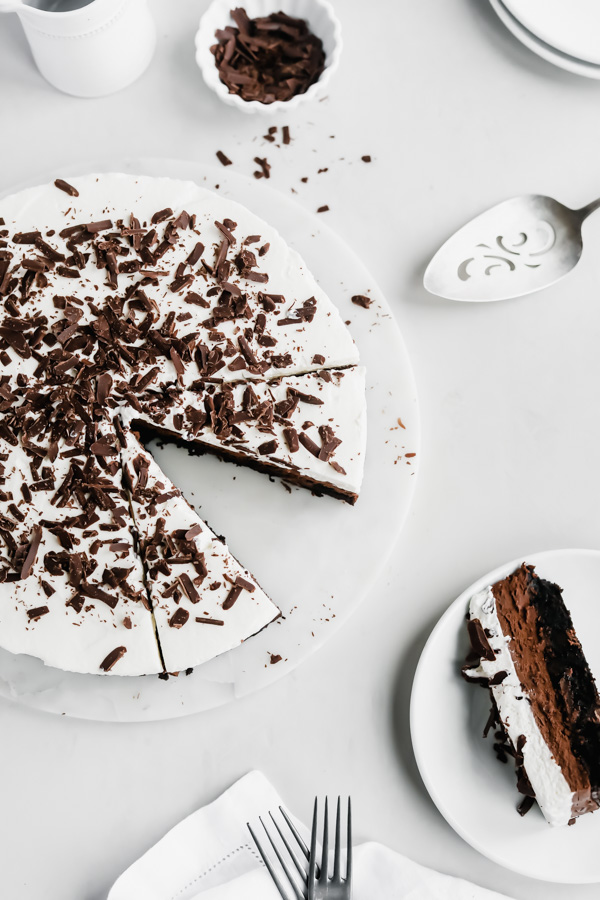 And there you have it. That, my friends, it how the Boxed Brownie Mousse Cake came to be. I mean, one look at this triple layer chocolate dream and I say “pass the fork”. This cake has so many things going for it, number one being that each layer is so easy to whip up and together they make just the right amount of fancy. To make this triple threat cake, start with your favorite box brownie mix. Any brand will do, but go for fudgy. You’ll bake the brownies in a springform pan until slightly under baked. While the brownies cool, you’ll whip up the chocolate mousse until it’s light and airy. After layering the mousse over the brownies, you’ll add a fluffy cloud of freshly whipped cream on top. After some chill time in the fridge simply top with chocolate shavings and dessert is served! 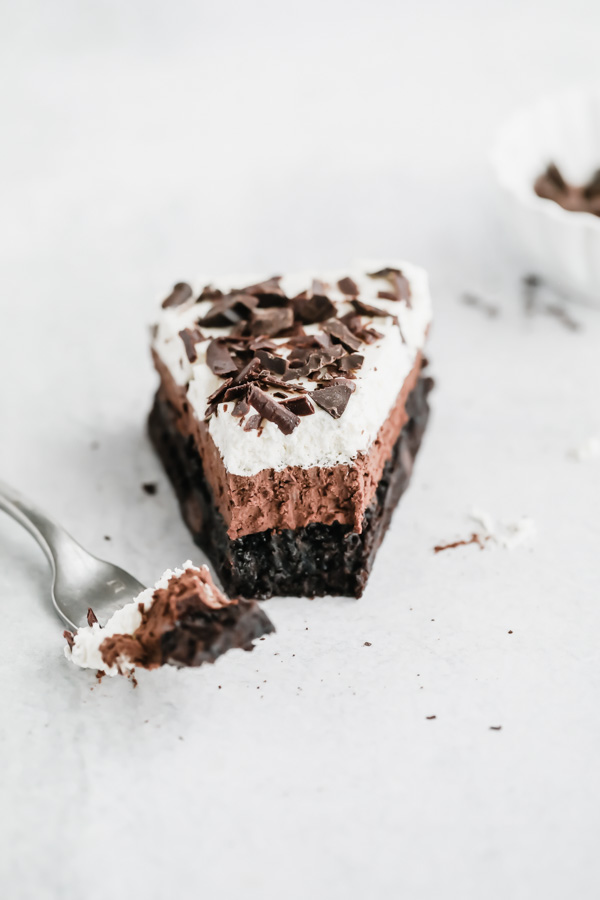 This is just the kind of chocolate lover’s dessert that will win over your hubby, boyfriend, or as my teenagers would say, your boo-thang this Valentine’s Day. February {aka, my favorite foodie month ever} is all about dreamy chocolate desserts like this Boxed Brownie Mousse Cake and I’m all in for this chocolate fest!  If you are in need of another chocolate fix right away, check to these recent posts for my Wanna-Be Brownie Cookies and these super easy, no bake Salted Caramel Dark Chocolate Cups. More of where that came from ahead so don’t go anywhere.

Be sure to sign up on the homepage for weekly recipes straight to your inbox. I hope you’ll give this Boxed Brownie Mousse Cake a try and if you do, be sure to tag @brownedbutterblondie on Instagram so I can see what you are baking up in your kitchen. And follow me on Pinterest for all the latest recipe details. I’ll see you back here next week for another drool-worthy chocolate recipe.

Until then, happy baking! 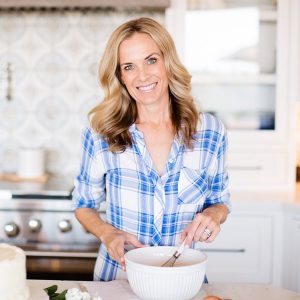 
Everything in our world pretty much seems upside d

We are just a week shy of Easter which means carro

I’m working on a batch of brand new quick + easy

finally gave my all time favorite recipe a much ne

✨GIVEAWAY CLOSED✨It’s no surprise I love a g

Saturday night cravings brought to you by dark cho